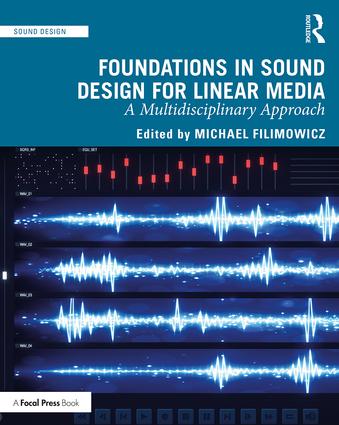 IN: Foundations in Sound Design for Linear Media, Routledge 2020. https://www.routledge.com/Sound-Design/book-series/SDS

“Knight-Hill continues on with “Electroacoustic Music” in what should have been allocated its own section. While the chapter covers the well-trodden ground of Stockhausen, Schaeffer, Oram, and U.S. computer music, it does so in a concise and accessible way, resulting in an ideal chapter to introduce students to the often disparate world of studies in electronic music.”

Electroacoustic music has inspired many of the creative sound design and audio processing tools available today, but the genre is often little known within sound design and music production circles. While these tools are a physical manifestation of Electroacoustic music’s influence, the ideas and concepts of this artform also have a great potential to contribute and inspire sound design and music production practice. This chapter explores the ideas and practices of electroacoustic music, seeking to reconnect these complimentary spheres, providing an introduction to more than a century of sonic practice and innovation which has resulted in a rich discourse for thinking about and composing sounds. This chapter reveals the significant ideas that have modulated our understanding of sound and which still have the power to inspire and inform the art of all those who work with sound.

Electroacoustic music is an art of sound. It treats all sound as musically valid material, radically extending the democratisation in sound that began with Schönberg’s 12 tone technique. The term refers to a wide range of musical practices, each of which emanate from specific aesthetic and technical histories. The term ‘Electroacoustic’ is derived from the processes of electro-mechanical capture and reproduction of sound, and so the term refers less to a specific aesthetic style and more to the methods and practices which make it possible.

Compositional ideas and techniques that have developed within the oeuvre of electroacoustic music are highly relevant to Sound Design practice, yet there is often a disconnect between these two worlds. This chapter introduces an array of practices and concepts from electroacoustic music, providing an introduction for the reader and a point of reference for further listening, reading and discovery. Such a chapter can never promise to encapsulate all approaches and indeed our understanding of electroacoustic music continues to develop and evolve. The history of electroacoustic music tends to be dominated by large scale institutions and key figures are often white middle-class men. This is due to both the socio-political context of the 20th Century and because the early technologies of electronic instruments and computing were very expensive and thus could only be afforded by large institutions. In turn these large institutions possessed bureaucracies that required the artists and musicians to document and justify their work, thus ensuring a rich historical record and archive. Independent artists and experimenters outside of these systems often, even those with diligent practices of documentation, were marginalised by the legacies of these larger institutes. However, the democratisation of music technologies, brought about by the shift to the digital, has opened up electroacoustic music practices to an ever-widening sphere and this increased diversity of practitioners has aroused considerable interest into the works of previously marginalised or forgotten practitioners. It is hoped that the following chapter will encourage an ever-widening diversity of sound practitioners to engage with the ideas and concepts of electroacoustic music practice, both to inform their own art and to contribute to the practice or electroacoustic music itself.